The effects of verbal instruction, age, and gender on performance and self-efficacy during cognitive tasks in high school students

Encouragement and discouragement are ubiquitous in every-day life, whether that be through a morale-boosting remark from a parent or friend or a disheartening grade on a project. Though one may feel that they can easily shrug these comments or feelings off, both encouragement and discouragement have been shown to have major effects on an individual’s self-efficacy, or the belief that an individual has in their ability to achieve a task [1]. Self-efficacy is important to an individual’s success because it can influence the amount of effort an individual may put forth towards a task or even an individual’s performance in many areas, including academics and sports [2-5] . Furthermore, self-efficacy is crucial in the context of high school, as it is positively correlated with engagement in school, discouraging problems such as school dropout, criminal activity, depression, and anxiety [16], [17]. However, most research concerning high school students has focused on studying self-efficacy related to academic subjects rather than broader cognitive functions such as short-term memory; of those, few, if any have directly studied the effects of verbal persuasion.

Self-efficacy is impacted mainly by mastery experiences (previous incidents of success or failure), vicarious experiences (the performance of other respected figures or models), verbal persuasion (encouragement or discouragement regarding an individual’s performance), and emotional arousal (feelings of anxiety or worry relating to the task at hand) [6-9]. Though all four sources of self-efficacy are important for understanding the topic as a whole, this study will focus primarily on the verbal persuasion aspect.

Additional factors can affect self-efficacy. Age plays a critical role in self-efficacy, with self-efficacy increasing as age increases [15]. Gender also affects self-efficacy. For example, female students typically have higher greater self-efficacy males in subjects such as writing [12], but lower self-efficacy than males in general academics, business, and entrepreneurship [18], [19]. One possible explanation for these differences is that self-efficacy has been found to have high domain-specificity, meaning that a measure of self-efficacy for a single topic often cannot be generalized across other domains [15].

A total of 23 students (7 male, 16 female; 35% White, 30% Asian, 17% Black or African American, 13% Hispanic or Latino, and 4% Middle Eastern) participated in this study. Although consent was obtained from 31 individuals, 8 did not fully complete the study and were excluded from further data analysis. Subjects ranged from 13 to 18 years old (M: 16.17 ± 1.4) and were recruited from the School for Science and Math at Vanderbilt and high schools in urban Nashville.  Prior to study participation, parental consent and minor assent was obtained via REDCap. After giving consent, each participant was sent a unique Study ID number that was not associated with their email address and could not be linked back to their survey responses. Each student was also randomly assigned to one of three groups: A, B, or C. Students in Group A received positive verbal instruction throughout the study, Group B received negative verbal instruction, and Group C acted as control, receiving no verbal persuasion. Additionally, each participant was instructed to complete a participant demographic form, which collected information including the gender, ethnicity, and age. In order to administer the experiment virtually, each participant was sent a link to a YouTube video to guide the participant through the procedure.

The first cognitive ability measured in this study was the ability to follow complex directions. Participants completed a complicated puzzle in four minutes that required careful reading of a set of instructions. Each group received the exact same puzzle and instructions but differed in the verbal persuasion received. Before attempting the puzzle, groups A and B received positive and negative persuasion respectively based upon Newlin, located as background information at the top of the page before the puzzle and its instructions [21]. Group A received positive persuasion stating that “high school students are reliable and accurate when completing directional tasks,” while Group B received negative persuasion such as “high school students are not reliable and accurate when completing directional tasks.” Group C received no persuasive information. Afterwards, participants filled out a survey to judge their performance on the directional task and their self-efficacy regarding the task. Self-efficacy was judged using a scale from 1 to 5, with 1 representing “strongly disagree” and 5 representing “strongly agree.”

Afterwards, all groups took part in an online digit-span test, which is commonly used to evaluate attention capacity and working memory [23]. During this test, a series of digits was displayed and read to the participant. The participant then immediately repeated the sequence of digits, after which they would be presented another sequence of digits, increased by one digit. Two variations of the test were administered: one where the participant repeated the digits forwards, and one where the digits were repeated in the opposite order. Each participant attempted both tests once, and the tests were discontinued if the participant repeated the numbers incorrectly. The participant’s score on this task corresponded to the sum of the maximum number of digits they repeated correctly for both the forward and backward variations [24], [25]. Another survey based upon the Memory Self-Efficacy Questionnaire was administered to measure performance and self-efficacy on the Memory Task, using a Likert scale of 1 to 5 [26], with 1 representing “strongly disagree” and 5 representing “strongly agree,” with the scale identical to the Directional Task.

After completing the survey corresponding to the Memory Task, each participant was debriefed and thanked for their time.

Coefficient alphas of reliability for the Directional Task and Memory Task were 0.66 and 0.77 respectively, indicating that the Likert scale surveys were reliable. To determine a singular value for both complex directional-following and memory self-efficacy, efficacy scores were summed across the questions then divided by the number of questions. The score for performance on the Directional Task was listed as the number of questions correct out of three, while the performance on the digit-span test was calculated by adding together the scores for both the forward and backward variants. Using Levene and Bartlett tests, it was found that the data did not violate the assumption of homogeneity of variance, meaning that the data did not depart from normal variances and that ANOVA tests could be used for further analysis. A multivariate analysis relating all continuous variables is located in Table 1. 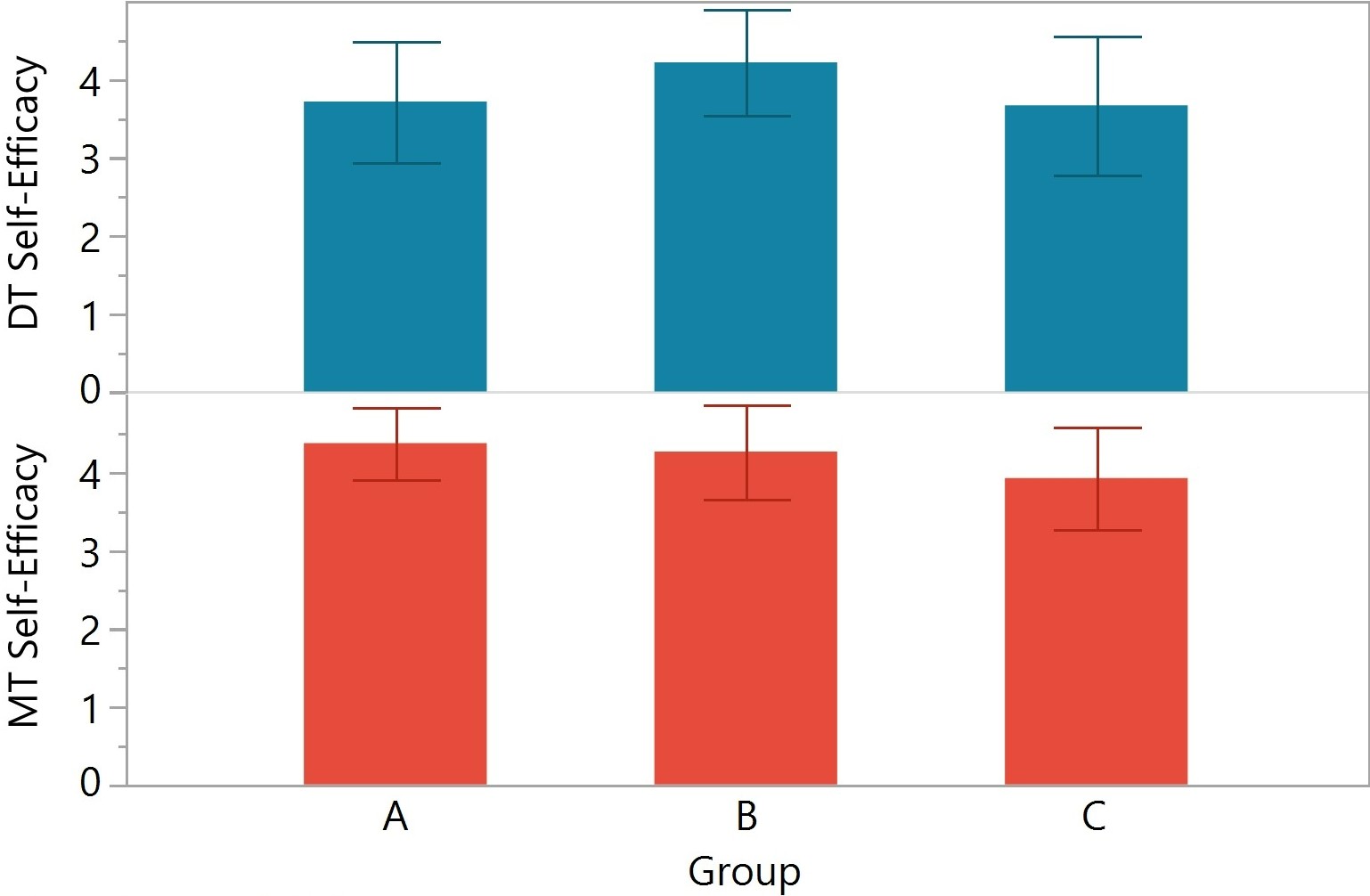 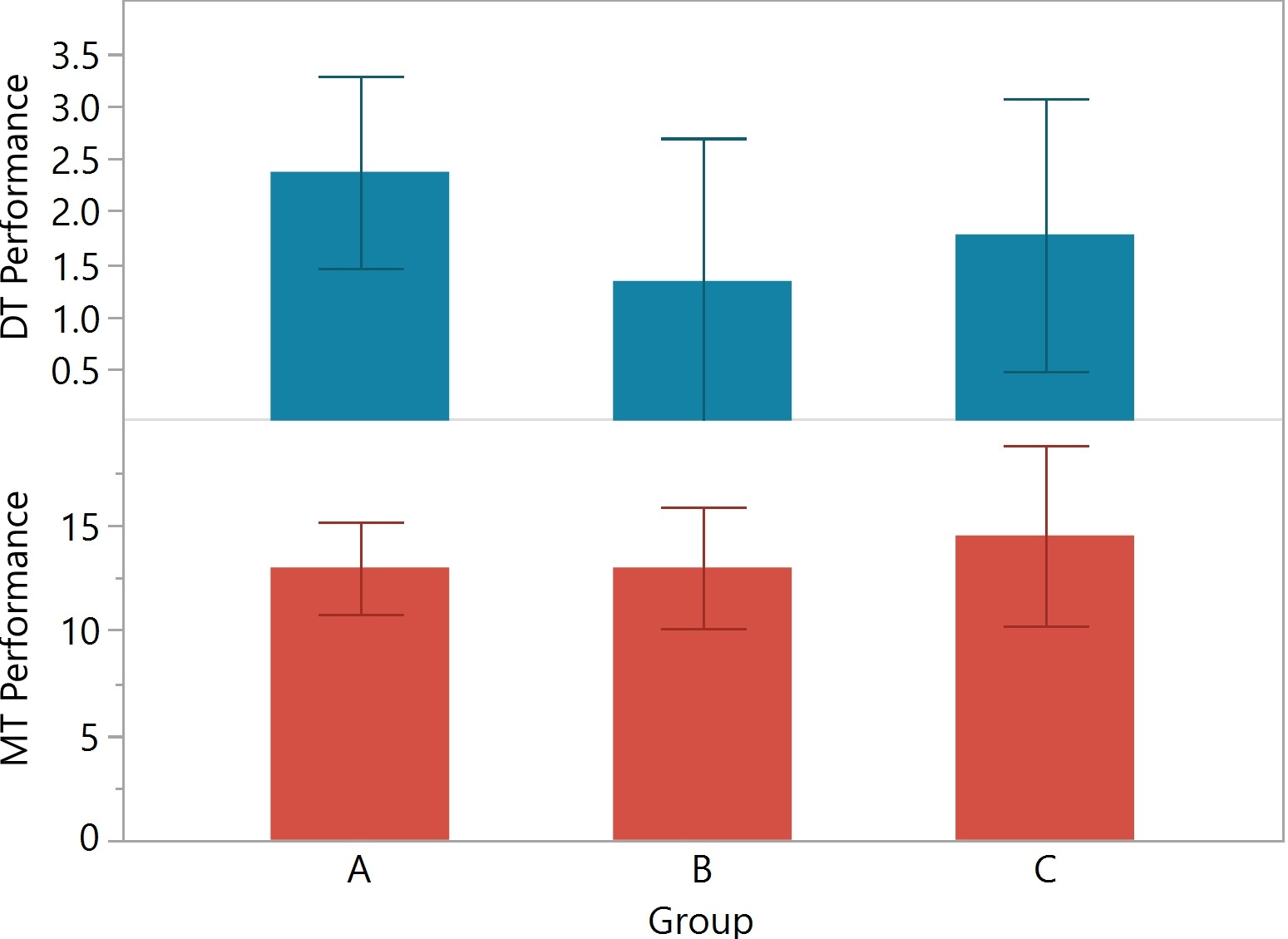 Figure 3. Effect of Verbal Persuasion on Memory Task (MT; red) and Directional Task (DT; blue) Performance. Group A received positive verbal persuasion, Group B received negative persuasion, and Group C received no persuasion. For both tasks, scores from the test were averaged and higher numbers signify better performance. For the MT, there was no set range for scores, but on the DT, scores ranged from 0-3, with 3 being the highest score. No significant effect of group was found on either Memory Task or Directional Task performance (both ps>.3).

This study had several limitations that should be taken into consideration before generalizing its findings to other situations. First, the sample size of this study consisted of only 23 participants from a limited range of academic abilities. Acquiring a greater number of participants from different academic backgrounds would create a more well-rounded sample. Another possible limitation was that testing materials had to be administered virtually via a YouTube video and online surveys due to pre-existing pandemic conditions. This system did have some benefits, including each participant viewing an identical video and the ability to recruit participants who may live farther away, but each participant completed the study at different times or environments, which could potentially alter results.

Conclusions from this study are especially important for educators and mentors of children. Though verbal persuasion in this study was not found to have a direct effect on self-efficacy or performance, it is proposed that verbal persuasion could be pivotal in how an individual frames their mastery experiences. Therefore, educators should take care to highlight not a student’s shortcomings, but instead their achievements and accomplishments. Additionally, because females tend to experience a significant decline in self-efficacy over time, special support should be given to females whose self-efficacy may be faltering, especially at a crucial period such as high school when an individual prepares for adulthood. Future research would focus on clearly identifying a relationship between verbal persuasion, mastery experiences, and self-efficacy, while exploring the implications of gender on this relationship.

Many thanks to Dr. Menton Deweese for her advice and support during this project. I would also like to thank the people who generously participated in this project and the School for Science and Math at Vanderbilt for its work to enable high school students to complete research projects.