Childhood stunting, defined as a height for age that is two standard deviations under the WHO’s reference population, is a good indicator of children’s well-being and an accurate reflection of inequalities present. Studies have shown that consumption of protein and animal sourced foods have been associated with lower stunting. This study aims to understand the relationship between various macronutrient intakes, including animal and plant protein, fat and carbohydrates and the stunting prevalence. The data timeframe was limited to 2009-2016 including 117 countries. An OLS regression was conducted to model the effect of each macronutrient on stunting. Geographical Information Systems (GIS) online was used to generate the relationship maps of the stunting prevalence and each respective macronutrient. There was a significant effect of animal protein (r2 = 0.646, p < 0.0001) and fat (r2 = 0.687, p<0.0001) intake on the stunting prevalence overall. The predictability of plant protein and carbohydrates on stunting, however, were less clear. The results may indicate that an emphasis on animal protein and fat intake may be beneficial for countries that have higher rates of stunting.

Childhood stunting is categorized by the World Health Organization (WHO) as children 0-59 months whose height is at least two standard deviations below the WHO’s Child Growth Standards Median for their age. Childhood stunting is a good marker of children’s overall health and wellbeing. Linear growth failure serves as an indicator of disorders associated with increased morbidity and mortality and reduced neurodevelopmental and cognitive function [1]. Evidence shows that stunted children have impaired behavioral development in early life, are less likely to enroll in school and have poorer cognitive ability than non-stunted children [2]. As the most prevalent form of child undernutrition, an estimated 22.0 percent (149.2 million) of children globally still show stunted growth as of 2020. Children living in Sub-Saharan Africa and Asia account for more than nine out of ten of all children with stunting [3].

Mounting evidence suggests that growth retardation is influenced less so by genetic factors and instead by environmental conditions such as nutrition. [4]. When examining the data on adult height, nutrition, and population health, nutrition and diet were shown to have an impact on height. While there is consensus on the important interaction between diets and undernutrition, views on the importance of specific nutrient dimensions of child undernutrition have evolved over the years. From the postwar period (1950s to mid 1970s), the WHO considered protein malnutrition as a major worldwide nutritional problem. In the years following the report, however, a review of the research showed that protein insufficiency was not as detrimental to growth as overall insufficient caloric intake was and the emphasis on it faded away [5]. However, studies performed in more recent years are calling the revisionist theory de-emphasizing protein intake into question. A longitudinal study on Bangladeshi children in the mid 90s reported total protein intake as a limiting factor in height and weight gains [6]. Higher protein intake was associated with a greater height and weight in children from the Netherlands [7]. Studies on children in Ethiopia and Iran show linear growth failure in children is associated with a diet lower in protein [8, 9].

Socioeconomic factors may play a large role in both linear growth failure and protein intake. Animal and plant protein were found to have a relationship with per capita income in a cross-country analysis of 142 countries [10]. Research on height in teenagers in India attempting to find an association between macronutrients in the diet and height found instead a stronger association between socioeconomic factors and height [11].

Globally, the world is not on track to achieve targets for stunting rates by 2030 and progress has stalled or worsened due to the COVID-19 pandemic [3]. The Food and Agricultural Organization (FAO) reported that a global shortage of protein rich foods would be expected due to COVID-19 and other factors [12]. Exploring the relationship between diet and stunting on a global scale is important especially now. Prior research has shown that protein intake may be a factor in stunted growth, but many of the studies done are small scale randomized control trials and observational studies or use household survey data in specific countries or regions. This research explores the relationships between various macronutrients, including animal protein, plant protein, fat and carbohydrates and the stunting prevalence in different countries using national level data. Understanding this relationship can be used to highlight areas of highest need for better policymaking as well as identifying the necessary steps for nutrition related interventions to achieve sustainable child development goals.

The data analyzed in this study were extracted from the WHO/UNICEF/World Bank joint malnutrition estimates as well as the Our World in Data diet composition by macronutrient dataset compiled from the Food and Agriculture Organization (FAO) Food Supply database. The joint malnutrition estimates datasets and the composition by macronutrient datasets are publicly available on the UNICEF website and Our World in Data, respectively [13,14].

WHO/UNICEF/World Bank joint malnutrition estimates include 957 data sources from various surveys containing point estimates for malnutrition categories. Details on data collection and methodology of calculations employed are described elsewhere [15]. Our World in Data obtained the macronutrient data from the Food and Agriculture Organization of the United Nations (FAO) The diet composition by macronutrient dataset includes the average per capita supply of calories derived from plant and animal protein, fat and carbohydrates all measured in kilocalories per person per day. This can be considered the average level of food intake. However, it does not account for food wastage at the consumer level and does not accurately represent the number of calories consumed.

Only countries with comprehensive data from both sources and years 2009-2016 were included in this study. Because yearly stunting data were not available, and data were extracted from two separate datasets, nutrient and stunting values for each country were matched by keeping the year of the data the same. If there was more than one year available within the 2009-2016 period for a country, the year closest to 2013 was taken as the nutrition data is only available up to 2013. The inclusion of data from 2009-2016 was to keep the stunting prevalence and nutrient availability within a comparable time period and given that malnutrition estimates were higher in the early 2000s after incidences of war and severe drought in Sub-Saharan Africa [16]. 117 countries were included in this study after the selection process (Fig. 2). Metrics of interest included stunting prevalence, calories of animal protein, plant protein, fat, and carbohydrates intake available, region and income classification. The regional breakdown included 42 countries in Africa, 36 in Asia, 22 in Latin America and the Caribbean, 13 in Europe, 3 in Oceania, and 1 in Northern America (The United States (Figure 2). 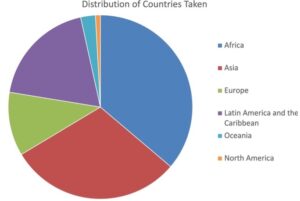 Figure 2. Flowchart of country selection and distribution of countries in each region used in analysis

Statistical analysis was performed in Python 3.9. For the primary analysis, an ordinary least squares (OLS) regression was performed to model the effect of each macronutrient on stunting. UN region and World Bank income classification were added as covariates because they could influence both stunting and various levels of macronutrient intakes. Regression coefficients with the 95% confidence interval were reported to determine whether there were any significant associations. The correlation coefficient (r2 value) and p-values were also reported.

Stunting Rate Varies Based on Global Region and Income Level 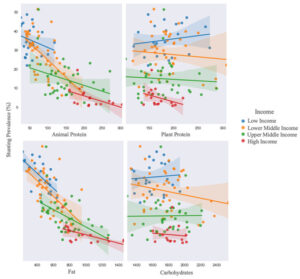 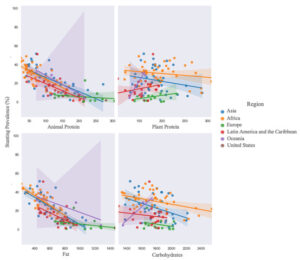 The same trend is true for fat availability in low-income countries, being less than half of the intake of fat in high income countries (Figure 1). This finding supports previous research suggesting that a higher intake of animal sourced foods may be associated with lower rates of stunting [17]. (Figure 3 and 4). This may be due to the relatively low availability of animal protein in low-income countries, being less than one fifth of that of high-income countries. Plant protein and carbohydrates were the only nutrients for which there was no significance found. Because higher total calories available was correlated with lower stunting (p<0.0001), this result may show that overall insufficient energy intake is a factor in linear growth failure in children.

Because animal protein and fat availability is low and stunting is high in low-income countries, the intakes of these specific nutrients must be raised to sufficient levels. The value of animal sourced protein needs to continue to be investigated given the negative contribution of diets high in meats and associated livestock production to greenhouse gas emissions [20]. While increasing the supply and affordability of a wide range of plant-based options to improve diet quality should be part of a public health policy agenda across low-income countries and can provide important nutrients, animal sourced foods contain larger densities of certain amino acids and micronutrients such as vitamin A, calcium and iron that are essential to growth [21]. Therefore, optimizing production in the livestock and fisheries sectors while minimizing greenhouse gas emissions is important for future research.

There were several limitations to this study. The sample size of the data was relatively small for some regions. For example, only 3 out of 14 countries in Oceania and one (the United States) from North America were able to be included and made it difficult to compare regions. Additionally, because the research does not use survey or observational data and instead uses pre-aggregated data for each country, this may lead to a loss of information and incorrect conclusions from drawing inferences from data about individual behavior using population level results [22]. To determine if there is a true effect of different macronutrients on linear growth pattern and if this association exists at the individual level, cross-sectional and cohort studies in infants and young children must be conducted. Furthermore, this study did not control for total calories when analyzing each macronutrient. Rather, total calories in relation to stunting existed as a separate model. A study that similarly used country level data incorporated total energy and total protein to model the stunting prevalence and found that only total energy was significant [23]. The question of whether insufficient total energy intake or protein intake is more impactful on stunting remains unanswered.

Future work should include an analysis over a longer period of time to examine the trend in rates of different nutrient intakes over the years in specific countries and how that may relate to the stunting rate. Additionally, using measurements of specific food groups can be helpful for understanding the associated micronutrient levels and the quality of the diet [7]. Using other types of malnutrition metrics, such as wasting and underweight, as well as overnutrition such as overweight and obesity, can be beneficial to optimizing the diet and intakes of specific nutrients.

This research investigates population-wide metrics that might have the greatest potential to contribute to stunting. Results from this study can be used by policy makers in government and global organizations to help make nutrition related interventions to best address the issue of stunting. Given the impacts the COVID-19 pandemic has had on access to food supplies and the availability of animal sourced foods particularly, understanding the importance of specific nutrients remains crucial to continue making progress in reducing malnutrition globally.

I would like to acknowledge Dr. Haag and Dr. Eeds at the School for Science and Math at Vanderbilt. for advising this project I would also like to thank Mert for all the help with statistical analysis.

[3] FAO, IFAD, UNICEF, WFP and WHO. 2021. The State of Food Security and Nutrition in the World 2021. Transforming food systems for food security, improved nutrition and affordable healthy diets for all. Rome, FAO.

[20] W. Willet, J. Rockström, Food in the Anthropocene: The EAT–Lancet Commission on Healthy Diets from Sustainable Food Systems – The Lancet. (2019). 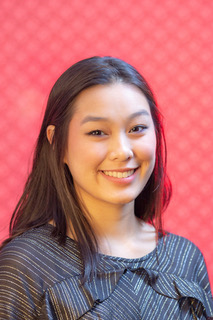