Posted by fuchskm on Wednesday, October 7, 2015 in Past Events, Uncategorized. 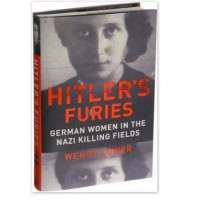 Now in its 38th year, Vanderbilt’s annual Holocaust lecture series is the longest-running program of its kind at any university in the U.S.

This year’s theme is gender and genocide which will explore how the multifaceted entanglements of gender and genocide, as they manifested themselves during the Holocaust, provide insight into some of the most salient and challenging issues in contemporary society.

As a part of the series, Hitler’s Furies: German Women in the Nazi Killing Fields will be presented Monday, Oct. 12th, 2015 at 7 pm in Wilson Hall 126

“The role of German women in Hitler’s war can no longer be understood as their mobilization and victimization on the home front,” writes Wendy Lower in her path-breaking book, Hitler’s Furies (Houghton Mifflin, 2013). “Instead, Hitler’s Germany produced another kind of female character at war, an expression of female activism and patriotism of the most violent and perverse kind.” Wendy Lower is the John K. Roth Professor of History and George R. Roberts Fellow at Claremont McKenna College.  As a reviewer for the New York Times noted in commenting on her path-breaking research: “We know plenty about the lives of young men in the Nazi regime. Ms. Lower is here to fill us in further on the young women … who, swept up in a nationalistic fervor, fled dull lives by going to work for the Reich in the Nazi-occupied East, in places like Poland, Ukraine and Belarus. They were after travel, nice clothes, adventure, paychecks, romance. Once there, many connived at genocide.  Earlier books about the Holocaust have offered up poster girls of brutality and atrocity… like Ilse Koch, the so-called Bitch of Buchenwald… Ms. Lower’s …insight is to track more mundane lives, and to argue for a vastly wider complicity. She follows more than a dozen German women … who stand in for an estimated 500,000 German women who went into the occupied East and thus undeniably stood …in the killing fields.”