Lecture by Inge Auerbacher, Child Survivor of the Holocaust 10/27/15

Posted by fuchskm on Monday, October 5, 2015 in Past Events. 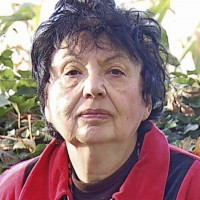 Inge Auerbacher was born in Germany in 1935 and spent three years between seven and ten years of age in the Terezin (Theresienstadt) concentration camp in Czechoslovakia. In her lecture, she will describe her memories of life before World War II in the small village of Kippenheim where she grew up; her family’s deportation to Terezin in 1942; and the ordeal of survival in a camp where starvation, disease, and transportation to the death camps were among the salient features of everyday life.

She and her parents managed to survive until the camp was liberated by the Soviets in May 1945. In 1946 they moved to the U.S., where Inge endured a long illness caused by the privations of her wartime captivity. Eventually she was able to recover, attend school, and ultimately launch a long and successful career as a biochemist. She has been lecturing and writing about her Holocaust experiences since 1981. She has been awarded the Ellis Island Medal of Honor for her work against racism and bigotry, and the Merit of Educational Distinction by the International Center for Holocaust Studies of the B’nai Brith Anti-Defamation League.

As part of the Holocaust Lecture Series at Vanderbilt, Auerbacher will speak on Tuesday, October 27th, 2015, 7:00 pm in Wilson Hall 103

Now in its 38th year, Vanderbilt’s annual Holocaust Lecture Series is the longest-running program of its kind at any university in the U.S. This year’s theme is gender and genocide which will explore how the multifaceted entanglements of gender and genocide, as they manifested themselves during the Holocaust, provide insight into some of the most salient and challenging issues in contemporary society.