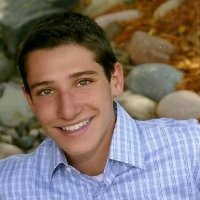 BLAKE SIDON has been named the recipient of the 2016 Miriam Halachmi Prize in Modern Hebrew.  “Since the beginning of his Hebrew studies in the Fall,” comments Senior Lecturer in Modern Hebrew Orit Yeret, “Blake has proved great dedication to the study of the Hebrew language and a continued motivation to excel.”

Sidon, a Human, Organization and Development major from Denver, Colorado, is a sophomore who transferred to Vanderbilt earlier this year. “Blake is a young man who carries himself with dignity and respect,” notes Prof. Susan Kochanowski, his academic adviser. Quickly finding Vanderbilt to be the perfect place for him, he takes part in different activities on campus, enjoys his field of study and is proud to be a part of the Vanderbilt community.

The Miriam Halachmi Prize in Modern Hebrew was established in 2015, in memory of Miriam Halachmi, who taught Hebrew at Vanderbilt for over three decades. Miriam passed away in February 2015.