The Modernity of Others: Jewish Anti-Catholicism in Germany and France

Posted by fuchskm on Saturday, September 28, 2013 in Research. 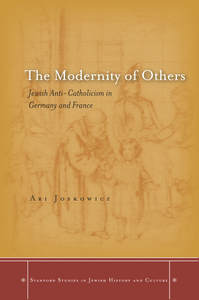 The Modernity of Others: Jewish Anti-Catholicism in Germany and France
By Ari Joskowicz
Stanford University Press, 2013

From the publisher’s website: The most prominent story of nineteenth-century German and French Jewry has focused on Jewish adoption of liberal middle-class values. The Modernity of Others points to an equally powerful but largely unexplored aspect of modern Jewish history: the extent to which German and French Jews sought to become modern by criticizing the anti-modern positions of the Catholic Church. Drawing attention to the pervasiveness of anti-Catholic anticlericalism among Jewish thinkers and activists from the late eighteenth to the early twentieth century, the book turns the master narrative of Western and Central European Jewish history on its head. From the moment in which Jews began to enter the fray of modern European politics, they found that Catholicism served as a convenient foil that helped them define what it meant to be a good citizen, to practice a respectable religion, and to have a healthy family life. Throughout the long nineteenth century, myriad Jewish intellectuals, politicians, and activists employed anti-Catholic tropes wherever questions of political and national belonging were at stake: in theoretical treatises, parliamentary speeches, newspaper debates, the founding moments of the Reform movement, and campaigns against antisemitism.