The Business of Identity: Jews, Muslims, and Economic Life in Medieval Egypt 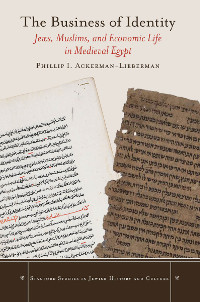 The Business of Identity: Jews, Muslims, and Economic Life in Medieval Egypt

From the publisher’s website: The Cairo Geniza is the largest and richest store of documentary evidence for the medieval Islamic world. This book seeks to revolutionize the way scholars use that treasure trove. Phillip I. Ackerman-Lieberman draws on legal documents from the Geniza to reconceive of life in the medieval Islamic marketplace. In place of the shared practices broadly understood by scholars to have transcended confessional boundaries, he reveals how Jewish merchants in Egypt employed distinctive trading practices. Highly influenced by Jewish law, these commercial practices served to manifest their Jewish identity in the medieval Islamic context. In light of this distinctiveness, Ackerman-Lieberman proposes an alternative model for using the Geniza documents as a tool for understanding daily life in the medieval Islamic world as a whole.