Robert Barsky is a Visiting Fellow at the University of Edinburgh’s Institute for Advanced Studies in the Humanities, where he is presenting work on his 2016 book called Undocumented Immigrants in an Era of Arbitrary Law: The Flight and Plight of Peoples Deemed ‘Illegal’  (Routledge Law). He is preparing a new book on front-line interactions between home and host country, for Cambridge Law. His new novel, Hatched, will be published this summer. A review is available at: http://www.sdjewishworld.com/2015/10/20/egg-citing-plot-twists-in-hatched

Virginia Scott’s article, “Multi-competence and language teaching” was published in the The Cambridge Handbook of Linguistic Multi-competence. To read the article here.

Jessica Greenfield was selected by the Center for Teaching to be one of the Junior Faculty Teaching Fellows for the 2016-17 academic year.

William Franke gave an inaugural lecture (“Liberal Arts Education in East Asia: The Unspeakable Basis of Comparative Humanities”) for the opening of a new School of Foreign Studies in the Beijing Capitol University of Business and Economics (CUEB), May 26, 2016. He also conducted a 2016 summer-semester block seminar on “Apophatische Theologie und neuzeitliche Philosophie” (Apophatic Theology and Modern Philosophy) in the Philosophy Department at the University of Frankfurt, co-taught with Prof. Wilhelm Essler.

After a Spanish teacher from MLK Magnet School in Nashville tragically died in an automobile accident, Paul B. Miller helped out by teaching courses to the AP Spanish students. 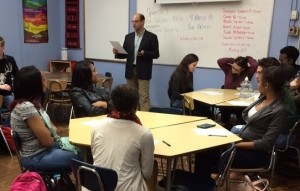 Congratulations to Lynn Ramey for her recent publications, grant awards, and invited lectures and workshops:

”Learning and Researching Medieval Language and Culture in an Immersive Environment.” School of Arts, Languages and Cultures, University of Manchester, UK. April 14, 2016.

Workshop on ”Introduction to Creating Immersive Environments in the Classroom in Unity 3D.” School of Arts, Languages and Cultures, University of Manchester, UK. April 15, 2016.

William Franke, who has worked for the last three years as head of a new graduate program in philosophy and religious studies at the University of Macao, is presently concluding his stay there with a series of public interventions addressing fundamental issues concerning liberal arts and humanities from the perspective of East Asian universities.  Current speaking events include:

In early December he spoke on “Theological Revelation and Secular Reason: Critical Proposals for a Meeting of Minds and Cultures,” in the Department of Philosophy, the University of Santo Tomas, The Catholic University of the Philippines, Manila, and the following day will address the Philippine Academy of Philosophical Research on “Negative Theology.”  (December 5-6, 2015)

Keynote Speech: “The Tradition of the Chinese Classics and the Aspiration to Universality: An Essay in Comparative East-West Poetics” (with simultaneous translation into Chinese) at the International Symposium on “The Orient vs. The Occident: Cultural Exchanges and Influences,”  Foreign Language Department of Capital University of Economics and Business, jointly organized by the Chinese People’s Association for Friendship with Foreign Countries, Capital International Culture Research Center of Beijing Language and Culture University, and the Comparative Literature Studies Center of Soochow University.  (Beijing, November 27-29, 2015).

In October Franke gave an address on “Liberal Arts Education in the East Asian University: The Unspeakable Basis of Comparative Humanities” at a Symposium on “Liberal Arts in the Age of Globalization” for the 10th Anniversary Celebration of Underwood International College, Yonsei University, Seoul, South Korea (October 28, 2015).

He also participated as a featured speaker with other professors of comparative literature in An International Summit Dialogue and Forum at the School of Chinese Language and Literature, Beijing Normal University on “What Is World Literature? Tension between the Local and the Universal.”  (October 24, 2015). Following this event he gave a lecture and a follow-up seminar on “Apophatic Paths from Europe to Asia: A Personal Philosophical Journey” at the Center for Zhouyi and Ancient Chinese Philosophy, Philosophy Department, Shandong University, China (October 20, 2015).

Paticia Ward gave an invited paper in September on ” Fenelon et la culture américaine” at a colloquium, Lectures et Figures de Fénelon, held in Cambrai and in Paris at the Sorbonne under the sponsorship of the Universities of Lille and of Paris and of the Ville de Cambrai and the Conseil Régional Nord – Pas de Calais.While she was in France, Professor Ward attended a reception for Vanderbilt alumni living in Paris and others in an alumni travel group visiting Paris; she gave a talk on Kate Lupton, 1859-1897, the first woman to receive a Vanderbilt degree, and her connections with France.

Elsa Filosa was named the Harvard University Center’s Andrew W. Mellon Fellow for 2015-16, a Villa I Tatti Fellowship for research on the Italian Renaissance

The Harvard University Center awards fifteen Villa I Tatti Fellowships annually, each for twelve months, for post-doctoral research in any aspect of the Italian Renaissance from the 14th to the 17th century. Fellows live in the Florence area and have access to the extensive Villa I Tatti library, archives, and Medieval and Renaissance music and art collections. The villa’s location provides a setting where scholars from around the world exchange ideas and carry out their research. A regular series of conferences, seminars, lectures, and concerts provides the opportunity for appointees to share and discuss their work with each other and the broader community.

Dr. Filosa will be researching the unsuccessful coup of December 1360 in Florence Italy. The Florentine Republic blamed twelve people, including close friends and neighbors of Giovanni Boccaccio. Dr. Filosa’s project investigates the political dynamics of the conspiracy, the motives behind it, and its consequences on Boccaccio’s life and writing.

Congratulations to Robert Barsky on his new book: Undocumented Immigrants in an Era of Arbitrary Law: The Flight and the Plight of People Deemed ‘Illegal’

Professor Robert Barsky’s newest book applies insights from the realms of language theory, literature and law to the complex interaction between undocumented immigrants and host countries. Published by Routledge Law, it will appear in the summer of 2015.