Posted by Juliet Larkin-Gilmore on Monday, April 22, 2019 in Updates.

April was a busy month for us. On April 11, Angela and Juliet interviewed Mr. Bill Radcliffe, longtime (maybe longest!) advocate for Fort Negley and its connections to Black history, surrounded by Shayne Davidson’s Seventeen Men portraits (see below). Originally from Detroit and a member of the 54th Massachusetts USCT Reenactors Group (of Glory fame), Radcliffe was drawn to the fort after relocating to Nashville. For years, he dress in his USCT uniform and come to Fort Negley to represent its history. He always came on the anniversary of the Battle of Nashville. We had a wonderful time interviewing this Fort Negley and living history legend. We’ll be editing his interview over the summer, so stay tuned for the full story! 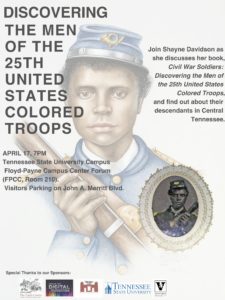 On April 16-17, we hosted Shayne Davidson, the author and artist behind  Seventeen Men, a portrait series of men from the 25th Regiment of the USCT (on display now at Fort Negley). Davidson based the portraits on a very rare, very small (“gem” size) photograph album of the men she found while researching a friend’s genealogy. The album was unique both for the race of the soldiers pictured and because they were identified by name.  The family has since donated the album to the Smithsonian National Museum for African American History and Culture. At a speaking engagement at Tennessee State University on April 17, Davidson shared her discovery and the genealogical research she did on each of the men pictured, and the process for creating the images. Davidson stamped each portrait with a copy of their entry in the USCT descriptive records (which lists all Union soldiers’ physical descriptions and details about their enrollment). For her, this ensured that their names would always be attached to their pictures. Enslavement has made African American genealogy an emotionally and technically difficult process. Keeping the names and images together helps to rectify those research challenges and to properly honor the men of the 25th USCT.