Vanderbilt College of Arts & Science is honored to welcome 52 new faculty members from both the 2020-2021 and 2021-2022 academic years to our growing community of distinguished scholars.

“We are thrilled about what this diverse roster of world-class researchers and educators will bring to our academic landscape,” said John Geer, Ginny and Conner Searcy Dean of the College of Arts and Science. “These proven innovators and creative collaborators will advance our understanding of the world around us in meaningful ways. We are honored they have joined our talented A&S faculty.”

Spanning 26 departments and programs, from Philosophy and Public Policy to Art and Chemistry, these scholars will further enrich Vanderbilt’s trans-institutional approach to education and research. 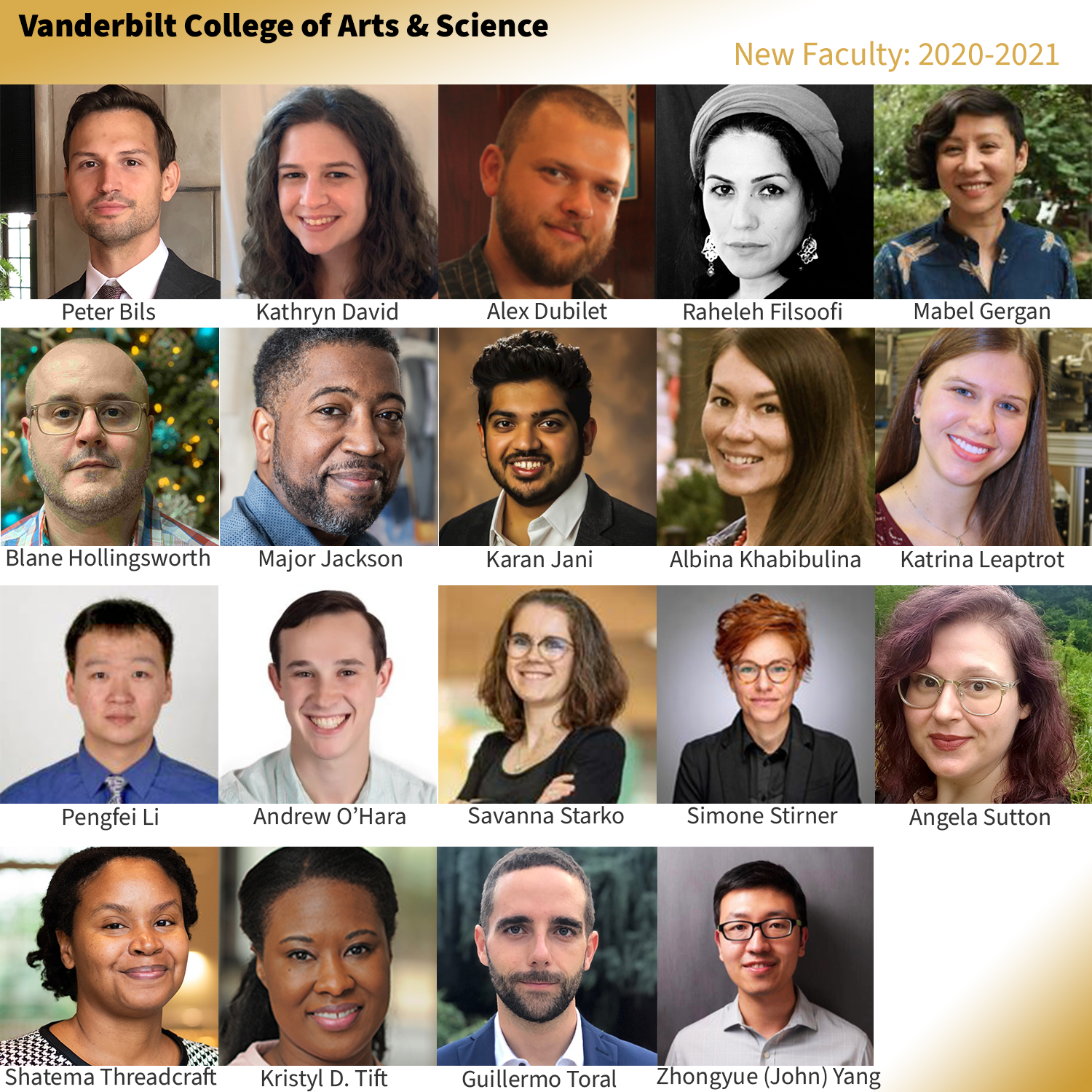 Peter Bils studies the political economy of institutions, with a focus on bureaucratic politics, lobbying, and elections in the United States.

Kathryn David is a historian of Ukraine and Russia interested in issues of religion, nationalism, and empire in the Soviet Union and in post-socialist Europe.

Raheleh Filsoofi is a multi-disciplinary artist who utilizes ancient and contemporary art media in her work with a focus on the literal and figurative contexts of land, ownership, immigration, and border.

Mabel Gergan is a geographer by training, and her research and teaching focus on postcolonial environmentalism, tribal/indigenous theorization, anti-colonial politics, and race and ethnicity in South Asia.

Blane Hollingsworth is interested in probability, stochastic differential equations, and board games.

Major Jackson, Professor of English and Gertrude Conaway Vanderbilt Chair in the Humanities

Major Jackson is a poet whose themes concern the redemptive power of art, language as a radical act of the imagination, and lyric expression as a site of individual freedom and selfhood.

Karan Jani is an astrophysicist whose research is at the forefront of understanding black holes and testing Einstein’s General Theory of Relativity with high-performance computing and gravitational-wave experiments on earth, moon, and space.

Albina  Khabibulina, Assistant Professor of the Practice in Russian

Albina Khabibulina is a specialist in second language acquisition and pedagogy, with research interests in sociocultural approaches to second language teaching and learning, dynamic assessment, and teacher training.

Katrina Leaptrot is a bioanalytical chemist focused on utilizing separation techniques including ion mobility-mass spectrometry to characterize lipids and other biomolecules in complex samples.

Pengfei Li is a scholar of linguistics and language acquisition and is experienced in technology-enhanced language teaching, course material development, curriculum design, and criterion-referenced assessment.

Andrew O’Hara is a scholar of physics with research interests in the application of density functional theory (DFT) and other computational methods in materials physics.

Savanna Rae Starko is a high energy physicist committed to ensuring all students are seen, heard, and valued in the Introductory Physics for the Life Sciences sequence.

Simone Stirner is a scholar of modern and contemporary German literature with a particular focus on poetry, memory studies, critical theory, and German-Hebrew literary encounters.

Angela Sutton is a social and digital historian of the Atlantic World interested in the tools and methods that preserve and widen access to the sources that help refine and redefine popular understandings of American slavery and its modern consequences.

Shatema Threadcraft is a political theorist whose scholarship focuses on the intersectionality of gender and race, and the history and visibility of race-based violence in America.

Kristyl D. Tift is a performing artist and performance scholar whose research traverses the intersections of race, gender, class, sexuality, religion, and citizenship in theatre and performance contexts.

Guillermo Toral is a scholar of comparative politics and political economy, with a regional focus on Latin America and a substantive focus on issues of development, governance, and corruption. 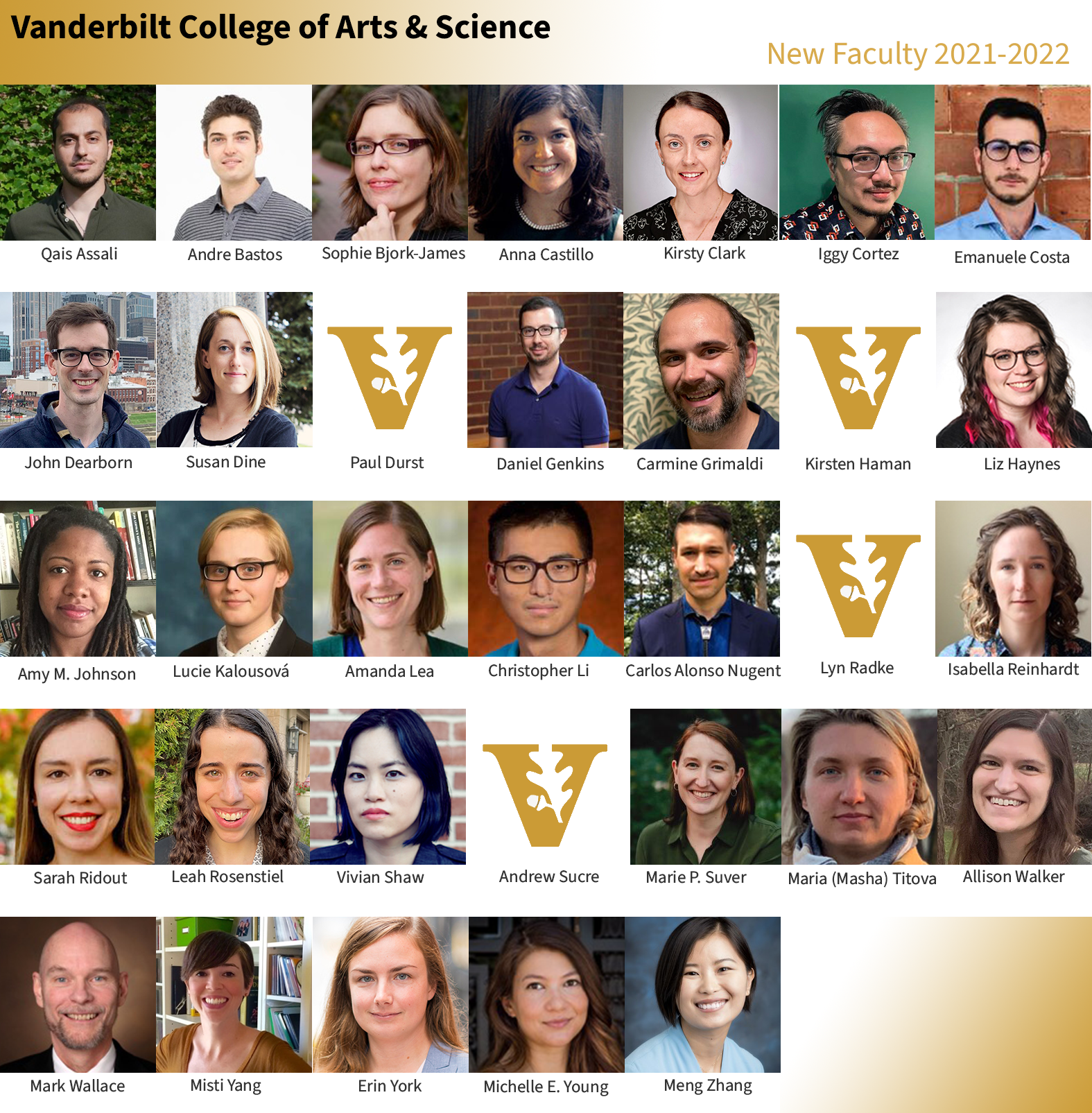 Andre Bastos is a cognitive and systems neuroscientist working to understand the neural basis of how the brain forms predictions, which allows us to more easily navigate a complex world.

Sophie Bjork-James is a cultural anthropologist who studies the intersection of gender and religion in evangelical, white nationalist, and anti-racist movements in the United States.

Anna Castillo is a literature and film scholar of the Southern Cone interested in contemporary works that delve into the relationship between intimacy and technology.

Iggy Cortez is a scholar of film and modern media researching the resonances between cinema, global diasporas, queer counterpublics, and the history of the senses in relation to the development of digital technology.

Emanuele Costa is a historian of philosophy, focused on early modern philosophy and metaphysics, but he also takes a keen interest in showing how the concepts and ideas developed in a different era shape the ways we understand our current world.

John A. Dearborn is focused on the presidency, Congress, and American political development, with a particular interest in the role of ideas in changes to presidential power over time.

Susan Dine, Senior Lecturer in History of Art and Architecture

Paul Durst, Assistant Professor of the Practice of Biological Sciences

Paul Durst is a scholar of evolutionary biology and genetics and is Director of Initiatives in STEM Education for the College of Arts and Science.

Daniel Genkins is a scholar of the applications of data science and related methodologies including machine learning for research questions in the history of the early modern Atlantic world and the humanities more generally.

Carmine Grimaldi is a filmmaker and historian of media and science, with a particular interest in the ways that the moving image, aesthetic experience, and everyday life are entangled.

Kirsten Haman, Assistant Professor of the Practice of Psychology

Kirsten Haman is focused on training and supervising the next generation of clinical psychologists to implement effective interventions.

Liz  Haynes, Assistant Professor of the Practice of Theatre

Liz Haynes is a teacher of theatrical production and a researcher of sustainability in entertainment production studying how any size venue or company can make environmentally responsible decisions regardless of personnel or budget.

Amy M. Johnson, Professor of the Practice of American Studies

Amy M. Johnson is a scholar of pre-colonial West African history and the British Caribbean with a focus on comparative slavery and slave resistance.

Lucie Kalousová is a sociologist studying social inequality and stratification of health through health and social policies in the United States and Europe.

Amanda Lea is an evolutionary biologist interested in how modern, urban environments impact health from genomic, developmental, and anthropological perspectives.

Christopher Li is a scholar of governance and political polarization using formal models.

Carlos Alonso Nugent is a literary, cultural, and environmental historian of the U.S.-Mexico borderlands (and, more broadly, the Americas), who is interested in the ways human communities have portrayed—and, in so doing, produced—more-than-human worlds.

Lyn Radke is a scholar of philosophy whose research interests lie at the intersection of ethics and the emotions.

Isabella Reinhardt is a classicist with a focus on the intellectual culture of Greece in the 5th century B.C., particularly in regard to Greek tragedy and presocratic philosophy.

Vivian Shaw is a sociologist and feminist ethnographer who specializes in global-comparative studies of race and gender in the context of social movements, culture, and the environment.

Andrew Sucre is a scholar of ethics, philosophy of law, and the history of philosophy.

Marie P. Suver is a scholar of sensation and the perception of movement, offering insight into general principles that nervous systems use to predict and learn about the world.

Allison Walker is a chemical biologist studying how machine learning can be applied to predict the function and biological activities of molecules.

Mark T. Wallace is a neuroscientist interested in how the brain combines information from the different senses in order to form a unified and coherent perceptual reality.

Misti Yang is a scholar of the rhetoric of science, technology, and engineering focusing on computer engineers and the intersection between communication and ethics in engineering contexts, including the development of artificial intelligence.

Michelle E. Young is an anthropological archaeologist and material culture specialist who investigates interregional interaction, ritual practices, and the emergence of new social identities in the pre-Hispanic Andes.

Meng Zhang is a historian of late imperial and modern China interested in economic-environmental dynamics, political economy, and transnational connections in the rise of global capitalism.